A Brief History of the Borough of Elmwood Park 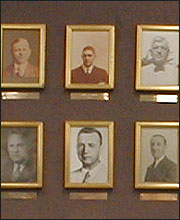 As recently as 300 years ago, New Jersey was Indian territory, roamed freely by the Lenni Lenape, a branch of the Algonquins. That changed as Europeans settlers moved into the area, gradually forcing the native peoples to move west.

Originally part of the Dutch colony of New Netherland, this territory fell into English hands in 1664, when all the land between the Hudson and Delaware Rivers was given as a gift to the Lords Berkeley and Carteret, who named it Nova Caesaria or New Jersey. In 1676 the colony was divided into two portions, with Carteret holding the eastern part of the colony, which became known as East Jersey.

Earliest settlements in East Jersey developed along the western side of the Hudson River near Jersey City and Hoboken as well as on the Hackensack River. In time settlers spread further north and west, locating near other rivers and streams.

This immediate area was attractively situated between two rivers later known as the Passaic and Saddle Rivers. It was part of a tract that was settled in the early 1700s by Dutch farmers, most of them named Cadmus, Toers, Garretson, Van Horn and Van Houten. Later in the century, they were joined by the Van Riper, Doremus, Berdan, Romeyne and Post families as well as others.

When the earliest settlers came to farm this tract, it was part of New Barbadoes Township, but that changed when the township was subdivided in 1716. The tract was then incorporated as part of Saddle River Township for the next 200 years. Within the large Township, the stretch of land along the Passaic River now known as Garfield, Elmwood Park and Fair Lawn was known as Slotterdam or Slooterdam through much of the eighteenth century.

The tract flourished as farmland until the latter half of the nineteenth century, when this quiet agrarian countryside was stirred by outside forces. A major influence was the Dundee Water Power and Land Company, which built a dam for water power across the Passaic River south of what is today Elmwood Park. The Dundee Dam, completed in 1860 between what is now Garfield and Clifton, promoted development of manufacturing in the area.

Though the land just north of the dam did not receive water power, it was certainly affected by it. With the dam and its subsequent back-up of water and the widening of the river to form what appeared to be a lake, the topography of our immediate section of the river was altered. The lake, called Dundee Lake, became a landmark, providing a popular recreation spot as well as a name by which to identify the contiguous area.

This became evident when in 1872 the New Jersey Midland Railroad Company ran the first passenger train between Hackensack and Paterson. One of the line's stops was on River Drive just north of what is today Market Street. Named the “Dundee Lake Station and Post Office,” it gave this portion of Saddle River Township its own separate identity.

Dundee Lake, like the rest of Saddle River Township. remained primarily agricultural until the end of the nineteenth century, when farmland around the Dundee Lake and Warren Point train depots and later the trolley line that ran along Broadway was sold to developers. These properties were divided into small home lots, and though few homes were actually built, the community began to change. Also built near the Dundee Lake Depot during this era was the Northern New Jersey Fair Grounds, which, for a number of seasons, attracted many visitors, especially for horse racing.

By the turn of the century, with factory jobs available in nearby Garfield, Paterson and Passaic as well as a local silk mill, increased numbers of people moved to Dundee Lake or commuted here to work. Meanwhile a golf course built along Broadway brought others for recreation. Though the town was still largely agrarian, Dundee Lake was growing far beyond the rest of Saddle River Township and paying almost half of the tax dollars. Its additional population, traffic and commerce required street lighting, roads, sidewalks and other improvements that the rest of the farming community did not.

Angered by repeated delays in appropriations for improvements, a group of Dundee Lake citizens formed a committee to establish an independent municipality. They selected a name for the new community and spearheaded a drive to have a required bill drawn up by the Assembly. After its passage, Dundee Lake residents voted on April 18, 1916, to secede from Saddle River Township. The new town was quickly incorporated as the Borough of East Paterson, and by June, citizens had elected its first public officials. One year later, residents from the Rosemont section of Saddle River Township voted to be annexed to East Paterson, extending the new Borough's borders.

In the decade following incorporation, the Borough obtained services such as water supply, sewage disposal, gas, electricity, door-to-door mail delivery and additional fire protection. By 1930, there was still much available land, but the population had doubled from 2,440 to 4,779. As a result, educational and social facilities, commercial establishments and travel ways were, by necessity, increased or improved.

The 1940s introduced many changes as large tracts of land were purchased for development. Early in the decade the Cherry Hill section was bought by the government to build much needed housing for workers in nearby defense factories, including Wright's local aeronautical plant. But most building took place after the war, with large housing developments as well as the introduction of a thousand garden apartments and a new, modern retail mall on the site of the former country club and golf course. As a result of the post-World War II “boom,” our population swelled to almost 16,000 and the needs of the community rose accordingly. As an example, existing schools could not house the influx of students, so three new schools were built in the 1950s.

The next twenty years saw a smaller but substantial surge in population to 22,749 as well as considerable building development. By 1970 the community was ninety-five percent developed, and building became minimal except for family units. By far the biggest change in the community had been additional division by major highways for mass transit. Already crossed by New Jersey State Routes 4 and 46, the town was further divided in the 1960s by the completion of the Garden State Parkway and Interstate Route 80.

In November of 1972, a major decision was reached by residents when the town voted to change the name of the Borough from East Paterson to Elmwood Park. The new name became official on January 1, 1973.